Get to Torgau before the Russians.

West Meets East is the 19th mission of R.U.S.E. and is the first part of the Germany mission series. It continues the story of Joe Sheridan, commander of the U.S. 1st Army alongside Andrew Campbell and Angie Summers, the latter being recently released from Colditz Castle; driving to Torgau to capture the research center there before the Russians do (based on the infamous Elbe Day, where the US 1st Army's 69th Infantry Division met with the 5th Guards Army's 58th Guards Rifle Division in Torgau).

After capturing Field Marshall Erich Von Richter in Belgium, Sheridan and Campbell interrogated him, and learned of information on a German weapons research in Torgau. Von Richter stated that it's now the problem of Sheridan since those weapons will fall to Russian hands. Three months later in Colditz, Angie Summers, after being released from Colditz informs Sheridan and Campbell that Prometheus also works for the Russians, making him a triple agent. Sheridan decided to rush to Torgau as soon as possible and managed to capture the HQ before the Russians did.

This is the infamous Elbe Day with a twist, ready? Now you need to capture that German HQ before the Soviets do, a twist from the original story in which the Americans meet the Soviets peacefully.

This is another you-don't-make-units mission, but you will be granted units later. The overview is that now Sheridan's First Army must reach Torgau ASAP, but there's a twist. No combat with the Russians since they're still allies, well, technically only on paper signed by the leaders. The 1st Ukrainian Front of 42 in-game units is driving to Torgau full speed, you will need to get that HQ before they do, which gives you 15 minutes or less to get there.

You will have a regiment of six Airborne units available directly. Kowalski then tells you the the M19's are ready for orders (2 M19's). These M19's are mobile AA units very useful in taking down aircraft and infantry, but don't face them with tanks, as they will be obliterated. You will then have reconaissance available in form of a Grasshopper recon plane. Then you will be granted a squadron of three Calliope rocket launcher tanks as well as a squadron of M36 Jackson tank destroyers. All the armored units will be replaced when they are destroyed, so don't worry. But you only have 6 Airborne units and that's it, they will not be replaced. If they all perish, you will fail the mission.

If you played as the Soviets on battles against CPU, you will notice that the Russians have the infamous Katyushas or more simple the "Stalinorgel" or Stalin Organ in plain English. They are rocket launchers, and fire large salvos of rockets instead of artillery. Their range may be small, but they have unequaled firepower compared to other artillery units. Only the Germans and the Americans have a similar type of unit. In our case now, we use the Calliopes, rocket launching Sherman tanks. Nice? They launch rockets like Katyushas but they have Sherman characteristics as well.

Now on to the walkthrough. As said above you will get the units, you will also notice that you can use 3 ways to get to Torgau. This guide will be for the center route, which is the fastest but most heavily defended. The other two routes are longer, but in exchange have thinner defences. There is a timer of 15 minutes, that is how long the Germans in the east can hold the Russians back until they are routed and killed. You will need to get the HQ before then. First order you rockets to destroy the barracks to the left, that will kill the annoying infantry that will be trained there. Now you will see 2 light units approaching, order your recon unit to scout them. They are Pumas, German prototype armored recon. Don't send the M19's to their deaths by approaching them. Instead, order your Jackson tank hunters to kill them off. Now, order your recon to scout the nearest town and order your Calliopes in this way: two to kill of the infantry in the city, one to deal with the Pak 36 gun in the woods. That said, advance your airborne to the cities and hold them there, but kill off the Panzer IV's that will be approaching you with your Jacksons, as they will shred the infantry.

There will be 3 infantry units approaching from the woods, kill them with Calliopes fast or you could kill them with your M19's. Scout the next city with your Grasshopper. You will see three Jagdpanthers, a Blockhaus, a MG nest, and 2 infantry alongside a Pak 40. Using your Calliopes, kill off the Blockhaus first, the infantry next, and the Pak 40 last. Your recon will then have to leave due to fighters, and then a Storch enemy recon plane approaches in its place. Kill that guy with the M19's. And now you will see a Stuka dive bombers approaching. Campbell will remark that they are Hans Rudel's madmen. What's scary about them? Their Stukas don't dive, they swoop! Those guys use 37 mm cannons on their wings to kill your armor. And don't hope these guys will appear on Battle mode, they appear only here. They have their own recon capabilities too, and with 37 mm cannons striking above, your armor won't stand fast. Order your M19's to kill the threats as soon as possible. Your recon will be back magically (don't know how), use them to scout the Jagdpanthers, and do not bother using your Jacksons to eliminate them. Use your airborne. Beware though, a Puma will stike you from your rear, so move your tank hunters back and kill him with recon support. Enemy infantry will also strike from the west of your position, so kill them with your M19's. Send your recon forward and you will see an airfield, two Stugs, and a Pak 40. Kill the Pak 40 first using your Calliopes, then the Stugs with the Jacksons, and also take down that airfield using that Calliopes after you killed of the Pak 40. Why? because that airfield produces the swooping Stukas and also houses an Me 262, the most annoying and best enemy aircraft in the campaign you can have. That is a jet fighter, so kill it fast while it's on the ground, or if you're a bit late, use the M19's, just make sure you don't see another Stuka coming in.

Then move your infantry up to the next city and hold it there. Advance all your armored units forward across the bridge. If you're fast the timer will show 9-8 minutes, so take your time now. On the east, the Russians get aircraft out of nowhere and kill all of the Germans. The Soviet armor also is moving fast, but take your time. After you take out the airfield, a new ruse should available. Activate Terror in the next sector. This ruse activates for two minutes, and any enemy unit in the area is prone to route easier. After that is done, a squadron of P-47s will appear and kills off most of the enemy armor there, saving you some time. If you're lazy, then be quick! There is a hidden Sturmtiger near the HQ, kill it off with your Jacksons, before it begins bombing your airborne. Another Sitrep, the Russians are killing the Germans so fast, but they won't be quick enough. By now, you should move your infantry near the HQ. When the timer shows 2 minutes, you will need to rush like there's lava coming at you. This is how it will go, 18 Pe-8 heavy bombers will appear out of nowhere from the east and will carpet bomb the German's base, destroying any buildings still standing there, followed by a massive wave of LI-2s cointaining Russia's paratroopers. These guys aren't the strongest paras, but there are many of them, so you better rush your infantry to capture that HQ since those Russians will drop the paras on the area near you (not like you can hurt them, but be wary anyway). So be quick and get that thing before it's too late.

Then if you get that HQ fast enough, you will finish the mission and Kowalski will predict that Germany is done, but, Campbell will think otherwise if Prometheus can start another war. 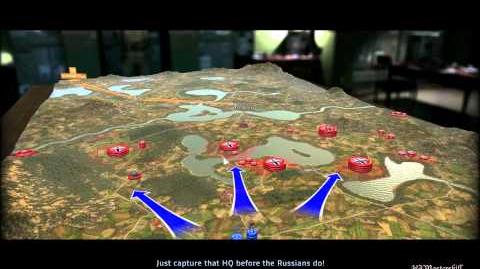 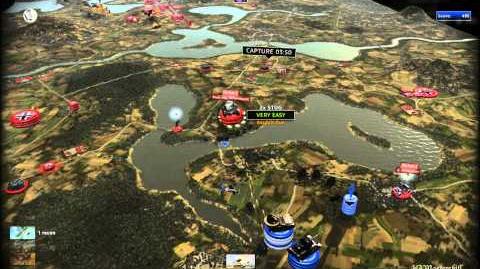