Send 8 Advance AT guns to Bastogne
Wacht Am Rhein is the 16th mission of the campaign of R.U.S.E. and also the first mission of the Belgium chapter of the campaign. In this mission, Sheridan and Campbell, now settling their differences and apologizing to each other, commands the 28th Infantry Division of the VIII Corps holding the town of Wiltz from the German Ardennes Offensive, while supplying AT guns to the city of Bastogne, HQ of the VIII Corps.

After the failure of Market Garden, Kate Garner was "called" back to Washington for a promotion, leaving Sheridan to think about his failures. Despite the failure, Sheridan is still recognized for his brilliant individual performance. In December 1944, Sheridan is Commanding the 8th Corps, resting in Belgium for a planned offensive into Germany.

For unknown reasons, Joe does not leave the front for Christmas. Campbell arrives and shows the intel of Market Garden from a captured German HQ, trying once again to prove there is a leak. Sheridan finally realizes Campbell was right, and apologizes, much to Campbell's surprise. Campbell realizes Joe has finally returned to his former self and accepts the apology.

The two men agree to work together to stop the leak, with Joe's first action putting his Corps on alert. Soon after, the men find out that Von Richter is about to strike with German reserves. Sheridan realizes his Corps is in a poor defensive position, and opts to fall back to Bastogne for defense, only to realize all the Corp's anti-tank weapons are on the front line with the 28th Division. Joe personally assumes command of the Division to evacuate the guns.

During this, Wetherby's Division, part of Joe's Corps, is infiltrated by German commandos, completely exposing Sheridan's flank. Kowalski informs them Wetherby surrenders after that, much to Campbell's shock and Joe's annoyance. The 28th, under Joe's leadership, manages to evacuate enough AT guns and even destroys a large number of the German Commandos. As Joe and Campbell retreat towards Bastogne, Von Richter calls to offer a temporary cease fire. Joe accepts to offer to give his Corps time to prepare defenses around Bastogne.

This mission can be easy or hard depending on your choices. Now you only have one armored recon. Move that little man to the other side of the river to scout the Germans. When he arrived, the Germans are under strict Radio Silence. Smart way for a beaten army, right? Yes. Using that tactic the Americans can't find out what the Germans are doing.

Okay, now the briefing. Campbell informs us on this: Your 28th Infantry Division, holding Wiltz are the only division readily available out of the US VII Corps, the rest are not active because it's nearing Christmas time and we are all supposed to be peaceful for a change. The HQ of the corps is in Bastogne in the south-center of the map. You are on the north-eastern region while the 106th Infantry, under "General" Wetherby, holds the north-west. Wetherby is now in command of a new division, something Sheridan SHOULD have done. But since it's designed this way , let's bear with it. Since the Germans are starting an offensive, Bastogne must be defended on all cost, or else the corp is destroyed, the Germans advanced to the coast and all is lost.

Now, the Germans, under Erich Von Richter, our favorite Nazi who is back from the Russian Front and promoted to Field Marshall, presumably to replace Rommel (note: by now Rommel is deceased, or dead because he was in part of the 20 July plot to kill Hitler and he is asked to commit suicide by High German Command, which of course he did being threatened with military court martial). They have 3 battle-hardened, battle-weared but ready Panzerkorps: the XLVII Panzerkorps, the LVII Panzerkorps, and the XXXIX Panzerkorps, falling under Von Richter's command of the Fifth Panzer Army. They will strike from 3 different point across the entire battlefield agains a well equipped American Corps. Sounds fair? I guess not, since you WILL be annoyed by Germans constantly attacking you. and 3 Corps againts 1 Corps, not a good idea..

Now, to the walkthrough. The Germans strikes hard with jet bombers, rocket artillery, tanks and infantry at the same time on all fronts, pull your recon back to the woods near your HQ. You will start with 3 Rangers and 2 Advanced AT Guns. These M5 AT Guns are 76 mm in caliber, capable of putting a hole in a Tiger tank if that tank is ambushed. These guys requires upgrade from the AT base, so upgrade the M1's on your base on to M5's, cost $50, but you will need them. You wanna put your Rangers on to the woods there they can ambush. You will also have some GI's on the front, and pull them back to the woods and stay there. Your defenses will be down if you don't do that. After that, put your AT Guns in place that they can hit on both bridges so, their tanks can't hit you. Now, you will need to supply 8 AT guns to Bastogne. They're $10 each, so make sure you're economy can support making them. make 2-3 each wave and send them to Bastogne. Use ruses if you have to. Now, remember your defenses can be overrun, so make sure you have enough GI's or Rangers to defend. If you haven't already, research Rangers and deploy about 6 of them.

Sitrep. Wetherby's 106th is pulling back! That useless piece of $#!% will pay for that! For others, they are holding on, but the Germans are persistent enough to give out jet bombers out to destroy our troops and defenses. And also the Germans are making progress, advancing through our lines. Send the Rangers to Wetherby's Secondary Headquarters.

Now, keep sending those AT guns, 2-3 each time, to Bastogne. By now you should have 5-6 AT guns there. But we got problem here. Wetherby is pulling back again! what's wrong with him! If he's alive now, let's kick him to show his impunity! But do that later, since his troops are firing on each other. That does it. Those are Germans on US uniforms and weapons! That ain't good.. Now the 106th has some Fallschirmjagers firing on them. Fallschirmjagers are Germany's elite, their shock troops and their paratroopers, which is so deadly to our infantry since their firepower is so great to the level of a Russian Gvardiyaand a French Foreign Legionnaires. For that, you will get a side objective, destroy Skorzeny's Commando, aka the Jagers you're facing now. Remember, they are infantry so they are susceptible to surprise attack by recon and other infantry. Do that. Use your recon and your Rangers to kill them near the woods. Then you will heard this: Wetherby's surrendering! That guy will definitely be kicked for his impunity, but we'll talk about that later. Now supple Bastogne with how many they need to reach 8 AT guns. Do that and the Germans will stop for us to build up defenses. That's kinda nice for a change. Turns out Von Richter wants to talk with Sheridan and we should agree with it, because that gives us time to stall. Mission over. 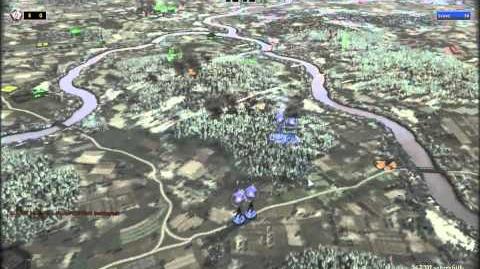 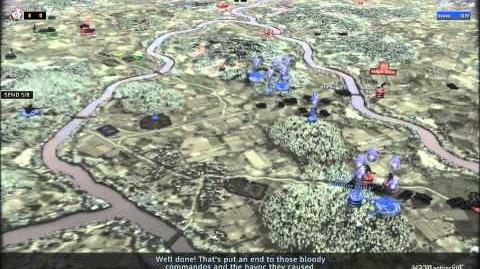