Hello I am from Australia, and have enjoyed RTS games my entire life and R.U.S.E is one of my favourite because of it's unique style of play and map design.

I mainly play the console version, because of its faster gameplay style and the different tactics required because of the population cap and time limit.

I try to be as friendly and helpful as possible.

Egypt 1941. A German propaganda/radio announcer labelled the Australian troops holding Tubruk as "rats". The Aussies ended up loving the name and kept it. The VB sign in front of them is a popular beer in Australia. 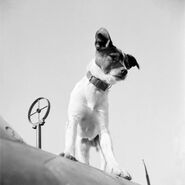 Sidi-Ahmed base, Tunisia, July 1944. The mascot of the fighter group GC II/5 "Lafayette", a little dog named "Satan", has pride of place on a plane.

This wounded Italian soldier in North Africa, takes comfort from his friend who followed him out into the battlefield.
Community content is available under CC-BY-SA unless otherwise noted.

Ranked #8
on this wiki