R.U.S.E. Wiki
Register
Don't have an account?
Sign In
Advertisement
in: Japanese arsenal, Anti-tank and anti-aircraft guns, Artillery and anti-air base, 1939 era

Artillery and AA base

24 km/h
Japan's standard AA unit, the Type 88 75mm (八八式七糎野戦高射砲) lacks the ability to hide in forests, making it vulnerable to artillery fire. The Type 88, however, comes at an excellent price; only 20$. Because it fires in slow, heavy bursts, instead of constant fire, it can send aircraft downward with four shots. The 75mm cannon also doubles as an anti-tank weapon, and an effective one at that.

The Type 88 75 mm AA Gun was based on an exhaustive evaluation by the Army Technical Bureau of several existing overseas designs, amalgamating some of the best features from each design especially from the World War I-vintage British Vickers QF 3 inch 20 cwt AA gun into a new, Japanese design. The Type 88 was superior to Type 11 in accuracy and range of fire.

The Type 88 75 mm AA gun entered service between 1927 and 1928, and was deployed to virtually every anti-aircraft field artillery unit as protection against medium level aircraft attacks. Although it was difficult and expensive weapon for Japan to produce with its limited industrial infrastructure and production technology, it was produced in larger numbers than any other medium anti-aircraft weapon in the Japanese inventory. Over 2000 units completed by the time of the surrender of Japan.

Japanese combat forces during the invasion of Manchuria, Soviet-Japanese Border Wars and the Second Sino-Japanese War found the Type 88 to be an extremely versatile weapon, suitable for use also as an effective anti-tank weapon when mounted horizontally. At the Battle of Iwo Jima and Battle of Okinawa, with armor-piercing warheads, it was found to be powerful enough to stop the American M4 Sherman tank in battle.

Towards the end of the war, many of the Type 88s were withdrawn from front line combat service and sent back to the home islands as part of the bolstering of Japan's defenses against Allied air raids and against the perceived threat of Allied invasion. Assigned to civil defense units in major Japanese cities, it was used in vain against the US bombers, as its maximum effective vertical range of only 7250 meters was inadequate. Some units were also assigned to coastal defense batteries.

+/-100m shorter range but it does have the same punch to it, leaving it the more economical solution.

-The missing 100m of range means it does not outrange modern heavy tanks which will easily deal with it. 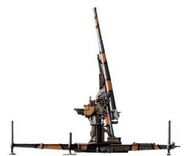