Primary
The Siege Of Bastogne, based on the real siege in Belgium, starts off with a short clip of General Von Richter meeting General Sheridan and offering to let Sheridan surrender. Sheridan is furious and refuses to surrender with the glorified word "NUTS!" The two Generals leave and return to their men.

Von Richter comments on it being a pleasure to finally meet to man that has bested him throughout the war, but skips to formalities, offering Sheridan a chance to surrender like Wetherby. Sheridan states he is no Wetherby, and begins to walk away. Before he leaves, Von Richter warns that Berlin has given orders not to take prisoners of war anymore, and that he can not guarantee the safety of Sheridan's troops.

Sheridan is undaunted, and begins defending Bastogne. Due to the bad weather, Sheridan's ground forces are forced to fight without air support for several days in the harsh winter weather. Once the weather clears, the Germans intensify their attack, using planes, and attempted to flank Sheridan with new King Tiger tanks. Joe's troops, now aware of Von Richter's new 'special orders', fight on even harder. Despite suffering casualties, the 8th Corps hold out long enough for British infantry under General Montgomery and American tanks under Patton himself to arrive. The Germans soon retreat afterwards.

Holy $^@*. This is a big, big trouble the Americans got themselves in. Okay, in general and to recap, Sheridan commands the VIII Corps, the only Allied force in Bastogne that can defend the city from falling to Germans, led by Field Marshal Von RIchter (don't be sick of this guy, he's awesome) who commands the Fifth Panzer Army. As you remember, "General" Wetherby's division is eliminated, with the guy nowhere to be seen and this leaves Sheridan as the main commanding officer. Von Richter, belive it or not, decides to disobey direct German order to NOT talk to Sheridan, what a guy huh? He's asking Sheridan to surrender, as German High Command instructs ALL armies to "spare no prisoners", and since he is honored to have Sheridan as an enemy, he breaks that rule to offer surrender. Sheridan's reply is this: "Nuts!", if you watch Band of Brothers on HBO, that is the reply of General Arthur McAuliffe of the 101st Airborne Division. So now, Von Richter has to obey German commands and Sheridan must do the impossible: defend Bastogne with only the VIII Corps, who are battle-weary. Ok, Your objective is simple: Defend Bastogne for 12 minutes. Here's the sitrep: Von Richter, still in his order-defying mode, gives Sheridan 2 minutes to set up his defenses. SO use it. The beginning of this mission is very simple, as your first objective you have two minutes to set up your defenses. It is advised to set up one or two machine gun nests and/or anti-tank bunkers at each crossroad. After the two minutes are up, Germans will send their Sturmgrenadiers to capture some of your supply depots. Do not fight back! Instead, deploy an AT bunker next to each MG bunker to your right flank. That will buy you valuable time.

Move your anti-tank and infantry units into the forests to set up ambushes against the German tanks and infantry. You will be way too busy to capture back your supply depots, for this time, you're not the aggressors, the Germans are. You are also advised to build one of every base, especially an Armor Base, because when the German's come, there going to use an all-out assault form every angle. Now all you have to do is defend your headquarters for twelve minutes, a lot harder than it sounds. The first move the Germans will make is they will advance straight in front of you with Panzer IVs.

Once again, leave them alone, if you attack using the Chaffees, it's not worth it. Then the Germans will come from the south-west of you, ambush them. While you are doing this, you will see a lone light unit coming from the North, it is really a King Tiger Tank using Reverted Intel, so use only one or two Rangers with the  75mm anti-tank gun to go ambush it (which is the best option) or attack it with bombers/fighter-bombers, although this is not the best strategy as if they fail, your airfields and buildings are exposed.

After 3~5 minutes use your priests(if you have any) and attack the armor base( infantry base is optional) as this will GREATLY weaken the charge on the north and send about 2~3 G.I. or Rangers with a greyhound or 7 Rangers with a Willy in the forest in the northeast between the roads, for this will allows the infantry units shoot down the supply trucks and allow the greyhound or the rest of the infantry to take care of the puma and enemy infantry coming in time to time.

Place 2 Shermans in the north and 1 Sherman at the East to provide cover of any suprise attacks. While this is settled in the right side of the map, send a rotation division consisting of 1st division: 1 Chaffee and 1 Sherman, 2nd division: 1Chaffees and 2 Shermans, and 3rd division: 2 Chaffees or 2Shermans. This rotation formation allows the Chaffee to quickly back off and let the Shermans soak up the damage and when switching, allows the Chaffe to get to position quickly since the Shermans wont make it in time.This formation should be next to the forests and close by the anti tank and infantry bunkers since the anti tank bunkers are stronger in damage but fragile (which is where the Sherman comes in).

Meanwhile over to the west, you will be trying to repel all of the enemy waves, which slowly become stronger and stronger. At this point it is strongly advised to build two or three Anti-Tank Bunkers, for they will be closing in very soon, also you will be able to use airplanes. Use them well! During the final part of the level, German tanks will flank around the right of the map with recon support to destroy your airports. German paratroopers will also appear, so station AA around your HQ. 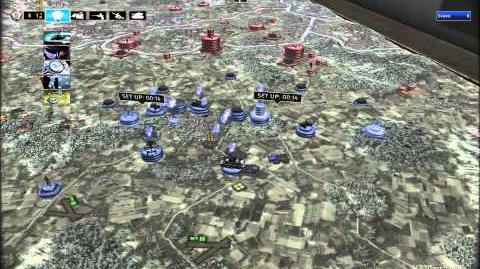 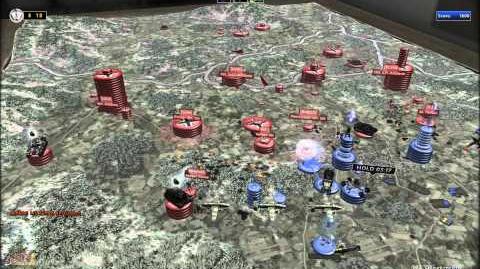