Very effective against all ground targets

The Super Pershing appears and performs just as a standard Pershing, except with a few upgrades:

The Super Pershing is not exactly a more advanced tank than the Pershing. Its benefits are almost negligible, as it has the same large caliber gun as the original Pershing, along with the same range.

With this upgrade, however, players playing as Americans can find themselves to be at an equal footing against German or Soviet players, even though German tanks are better off and Soviet tanks have better armor, since the Super Pershing has equal firepower to that of the King Tiger and better than that of the IS-2, faster speed than any of the heavier tanks, they can regroup faster and can re-engage enemies faster. Combined with the rather quick production time and the unchanged price, the Super Pershing can equal or overwhelm enemies, if sufficient and right ways of reconnaissance is used.

A second pilot tank was converted from a T26E3 and used a modified T15E2 gun that used a two piece ammunition. A total of 25 of these tanks were built and designated as the T26E4. An improved mounting removed the need for stabilizer springs.

Post-war, two M26 tanks had the T54 gun installed, which had the same long gun barrel, but the ammunition cartridge was designed to be shorter and fatter, while still retaining the propellant force of the original round. They also had the muzzle brake and bore evacuator from the M3A1 gun of the M26A1 and M46. The tanks were designated as the M26E1 tank, but lack of funds cut off further production.

A single Super Pershing was shipped to Europe and given additional armor to the gun mantlet and front hull by the maintenance unit before being assigned to one of the tank crews of the Third Armored Division. An account of the combat actions of this tank appeared in the war memoir Another River, Another Town, by John P. Irwin, who was the tank gunner. Zaloga described three actions in his book. On 4 April, the Super Pershing engaged and destroyed a German tank, or something resembling a tank, at a range of 1,500 yd (1,400 m). On 12 April, the Super Pershing claimed a German tank of unknown type. 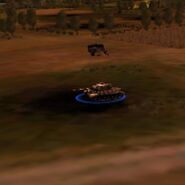