Secret Weapons is the 21st mission in R.U.S.E..

The transition army has seized the prototype facility, and Joe's men prepare to destroy it. But the 1st Front of the Ukraine is building up to strike. While the others rig the factory, Von Richter takes control of the German prototype units to hold off the Russians...

You have a airport with upgraded German planes and a prototype factory to build from. You have three minutes to prepare. First, build two supply depots. Now you should build three of your trump cards, Maus Super-heavy tanks! Deploy one on the right flank near the gate and that area will be good for the rest of the mission, deploy another one to the left road, though keep it back and away from the forests.

Deploy the final Maus between the two towns, but make sure it has a good line of fire. Mauses move slow, so you can use blitz to speed them up. The Russian assault should begin as soon as the tanks are in place. They can hold on their own for a while. Build a Blitz bomber and quickly send it to the left to destroy a Soviet MG nest. This will help later.

Next, you need to deploy two Wirbelwinds, one by the tank and the center and one by the left flank. As the assault intensifies, Italian AT/AA guns will arrive on the left flank. If you destroyed the machine gun bunker, they are at your command. Deploy them on the left flank, as Russian armor funnels through here very often. You should also deploy a second Maus to the left to support the first and draw fire from the guns. Note: A bunker can be placed as a slightly cheaper alternative, but it won't last long...

The AI will usually use a fake air assault around this time. Your Wirbelwinds will take care of planes real and decoys. If you have spare funds, deploy another Maus between the center cities. On your right flank, four of Lanciafiammes will arrive, only to be cut off by a Russian air assault. You can either send your eastern Maus to deal with them, or send your

AR234 Blitz to quickly destroy them. After you destroy the paratroopers, you will gain the flamethrower tanks. Quickly shuffle them back to base. Around this time, Russian artillery will fire on your supply depots from the top of the map. Though at this point supplies are unneeded, they may hit lighter units. Send your blitz bomber, as one run will destroy it, even if the plane doesn't make it back. The Russian steamroller will start up at this point; massive amounts on infantry will sneak through the woods to try to capture the prototype base.

If you saved the Lanciafiammes, you will have a easy time halting the advance (ha! Infantry vs. flamethrower tank, guess who wins? Who wants to become barbecue?). Alternatively, deploy a Puma to allow the Maus to fire on the infantry, deploy German rockets to support the tanks. Your defenses should hold for the next few minutes till the mission ends. Ishak fighters will clog the skies, so you might want to deploy another Wirbelwind. 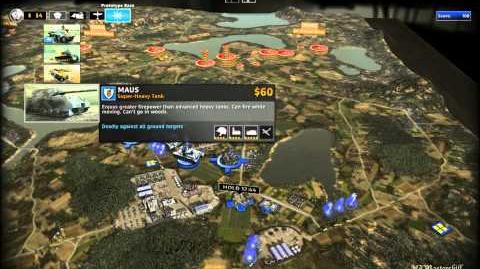 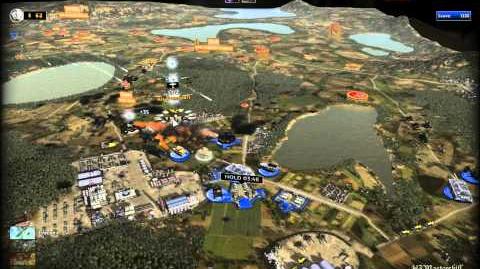