27 km/h
The SU-85 was developed in 1943 to add better anti-tank capability to Soviet tank battalions, after experience at the hands of German Tigers and Panthers proved that the KV-1 and T-34 (mounting 76,2 mm multipurpose guns) were too lightly armed against tougher tanks. Mounting the D-5T 85mm gun later mounted on the T-34-85, the SU-85 proved invaluable in fighting the Heer before the T-34 made it obsolete in 1944. When the new T-34 models started rolling off the production lines, the SU-85 was up-armed with 100mm D-10S gun to keep it competitive, resulting in the SU-100. The SU series was heavily influenced by the German Sturmgeschutz, and began with the SU-122 howitzer, and served Russia well into the Cold War.

Early in World War II, Soviet tanks such as the T-34 and KV-1 had enough firepower to destroy any German tank then available. However, in the fall of 1942, Soviet forces encountered the new German Tiger tank, with armor too thick to be penetrated by the 76.2 mm guns used in the T-34 and KV-1 tanks at a safe range. By spring 1943, the Soviets had also received reports of the new Panther tank, although the Panther was not seen in combat until July 1943, during the battle of Kursk. This new generation of German vehicles meant the Red Army needed a new and more powerful tank destroyer.

In May 1943, work was begun on both a new anti-tank gun and a redesign to the armament of the SU-122. Developers of the former put their efforts to adapting the 85 mm heavy anti-aircraft gun, one of two types identified as best against the Tiger (the other being the 122 mm A-19). The SU-122, meanwhile, was rearmed with an existing 85 mm gun, the S-18, which was itself improved in the process. The production factory at UralMash, which received the SU-122 design, attempted to reject the design as too expensive, since the larger gun breech meant that the entire hull would need to be modified, but it was required nevertheless to put the design into production.

The SU-85 entered combat in August 1943. It saw active service in Soviet, Polish and Czechoslovak forces on the Eastern Front until the end of the war. It was obsolescent by 1945, and was withdrawn from active service not long after the war, to be exported to many Soviet client states in Europe and elsewhere.

Drawing of the SU-85 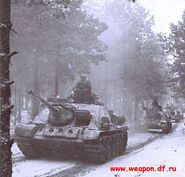