British paratroopers had their origins in no less than the SAS commandos, who trained the first Parachute Regiment at the outbreak of the war. Trained for fast strikes, commando-style operations and able to make good use of poor armament, they were among the most the dangerous opponents in close combat. Like most of their foreign counterparts their main weakness is their poor anti-tank capacity, as they are equipped with the mediocre PIAT rocket-launcher.

The Parachute Regiment has its origins in the elite force of Commandos set up by the British Army at the request of Winston Churchill during the initial phase of the Second World War. Churchill had been an enthusiast of the concept of airborne warfare since World War I, when he had proposed the creation of a force that might assault the German flanks deep behind the trenches of the static Western front. In 1940 and in the aftermath of Dunkirk, Churchill's interest was caught again by the idea of taking the fight back to Europe - the airborne was now a means 'to be able to storm a series of water obstacles... everywhere from the Channel to the Mediterranean and in the East'.

Enthusiasts within the British armed forces were inspired in the creation of airborne forces (including the Parachute Regiment, Air Landing Regiments, and the Glider Pilot Regiment) by the example of the German Luftwaffe's Fallschirmjäger, which had a major role in the invasions of Norway, and the Low Countries, particularly the attack on Fort Eben-Emael in Belgium, and a pivotal, but costly role in the invasion of Crete. From the perspective of others, however, the proposed airborne units had a key weakness: they required exactly the same resources as the new strategic bomber capability, another high priority, and would also compete with the badly stretched strategic air lift capability, essential to Churchill's strategy in the Far East. It took the continued reintervention of Churchill to ensure that sufficient aircraft were devoted to the airborne project to make it viable.

Britain's first airborne assault took place on February 10, 1941 when, what was then known as II Special Air Service (some 37 men of 500 trained in No. 2 Commando plus three Italian interpreters), parachuted into Italy to blow up an aqueduct in a daring raid named Operation Colossus. After the Battle of Crete, it was agreed that Britain would need many more paratroopers for similar operations. No 2 Commando were tasked with specializing in airborne assault and became the nucleus of the Parachute Regiment. The larger scale drops in Sicily in 1943 met with mixed success, and some commanders concluded the airborne experiment was a failure. Once again, it took the reintervention of senior British political leaders, looking ahead to the potential needs of D-Day, to continue the growth in British airborne resources.

Extensive successful drops were made during the Normandy Landings, under the command of General Richard Gale, but Operation Market Garden against Arnhem under General Frederick Browning were less successful, and proved, in the famous phrase, to be A Bridge too far. Later large scale drops, such as those on the Rhine under Operation Varsity, were successful, but less ambitious in their intent to seize ground. After the war, there was fierce debate within the cash-strapped British armed forces as to the value of airborne forces. Many noted the unique contribution they had made within the campaign. Others pointed to the extreme costs involved and the need for strict prioritisation. During the debate, the contribution of British airborne forces in the Far Eastern theaters was perhaps underplayed, to the long term detriment of the argument.

Several parachute squadrons of the Royal Air Force Regiment were formed in World War II in order to secure airfields for the RAF - this capability is currently operated by II Squadron. 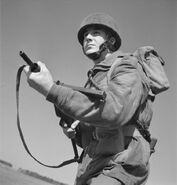