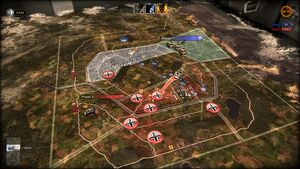 There is a multiplayer mode available in R.U.S.E.. It is designed to be "more exciting than just click a button faster than your opponent to create units faster". instead, R.U.S.E. requires more of a strategic approach in order to win. Using manipulation, bluffs, and other strategies that will confuse your opponent as well as the Unit producing and battles. Therefore winning is more rewarding to the player, because the player used his/her intellegence and thier own strategies to win.

Multiplayer battles can either be un-ranked, ranked, or played against the game's AI which only have 3 difficulty levels to choose from. when playing against AI's, you can have another player join on your team, or play against you With the other Ai. Ai's are simply player replacements when playing in battle or multiplayer.

Ranked matches can either be played as 1v1 or 2v2, XP earned from these matches go to both your overall level and your the specific championship level (either 1v1 or 2v2). In these match-ups opponents and allies are randomly match-made. The time period is set at 1945 and the game time at 25 minutes.

The levels you can obtain are:

Un-Ranked are hosted by players and can be set to any time period (1939, 1942 or 1945) and any available time limit. Matches can either be teams or free-for-all, PC supports up to 8 players while the console versions only support up to 4. XP earned from these matches only goes towards your overall level.

All types of multiplayer matches revolve around the same concept: either earn over 10% more points that your opponent(s) in the alloted time or complete annihilation. Points are awarded for the killing of enemy units and structures as well as the capture of enemy structures. players will draw if their points do not exceed 10% of their opponents. A minor victory is achieved if the player's points are over 10%, a major victory if over 40% and total victory if over 70% of the opponents.

There is a co-operative mode

. Most likely, it will operate in a similar manner to 'allies' in the Campaign. You and your teammate will each play a faction, where your partner's faction will be marked as Allied to you, and vice versa.

Allies are marked as green units on the board; outside your control, but friendly to you and your units, and capable of assisting you against enemy attack. Your own units, like in the Campaign, will most likely be marked blue, and will respond to orders as normal.