Kate and her rogue Russian allies know where the missing prototypes are. Now Department 7 and herself are holed up in a previous German research center, intent on releasing nuclear weapons on Germany. Joe, Campbell, and Summers are determined to stop her. They realize they must capture her HQ before they can gather enough supplies.

NOTE: It is highly advised to select either the 1st Armored Division (USA) or the German Transition Army (Germany) as strong tanks are required to tango with the Russians.

This level is all about time and multitasking. For your southern base, you need to research heavy infantry and deploy them in the surrounding woods with recon support. You need to research a heavy tank, bombers, and fighter bombers if needed. Deploy tanks around your other base and build bombers. To slow down the enemy, destroy their prototype factory, artillery bases, barracks, and secondary headquarters on the left of the map.

Once all three secondary headquarters are destroyed, you can destroy the supply depots and the enemy won't rebuild them. Positioning a parachute unit in the upper woods will cut them off entirely. You should also destroy ONE of the barracks in the top part of the map. Once this is accomplished, you can turn your attention to the 'main' base. There are AA guns, both static and mobile, surrounding it, but luckily Russkie AA isn't the best.

If you reveal the AA in the lower part of the base with recon, your dive bombers can get rid of them with low casualties. Once out of the way, your bombers should destroy their production buildings, prototype and armor bases taking priority, as they will not rebuild anything. While doing this, you should be massing tanks at your tank base. Move several tanks close to their HQ. If they are close enough, they should destroy the seemingly endless amount of supply trucks, effectively prolonging the level so you can finish up bonus objectives. Russian fighter bombers are frequent, so have your own fighters on standby. Once you are ready, land paras nearby and capture.

If playing as the British, judicious usage of paratroopers and typhoons is required.

Due to lack of strong british armor, upgrade to typhoons and use with recon to destroy all enemy units in the armor base, use paratroopers to capture all structures, use spy ruse and takeout both Mobile AAs before dropping more paratroopers to capture, garrison the town to secure from attacks from the barracks to its North. Train AT guns from the armor base area and use them to protect your lower base.

Put an outpost or two around your upper base to protect from infantry attacks, place infantry in forests around lower base to take out attacking tanks.

Use a mass paratrooper drop to secure the topmost supplies and garrison the town, continue building and using the typhoons to destroy enemy AT guns in the forest around the barracks, then use cromwells to attack and more paratroopers to secure (remember to secure the barracks structure first!).

Move cromwells to upper right part of map to block the supplies coming from there, drop paratroopers onto the road in the abandoned base to block that side as well (There are AA guns in the forest in front of the main base).

At thi point, creep forward using air recon and typhoons, destroy AA guns first, then drop paratroopers to capture, the enemy may attempt to attack using tanks, so make sure you have your own AT guns in the lower base to defend.. 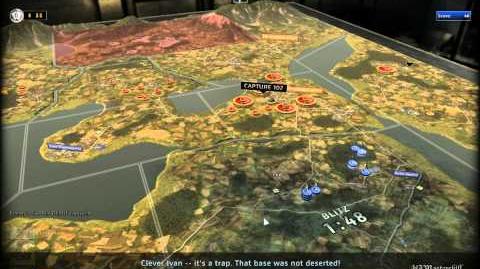 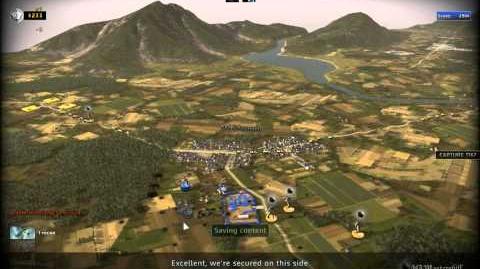