Deadly against all ground targets

The 1945 version of the "Iosif Stalin" series and a major improvement over the IS-2 in firepower, this beast made it to Berlin only in time to participate in the Allied Victory Parade, where it nonetheless shocked foreign observers - unlike most "super-heavy" tanks (although it was built as a regular heavy) it did make into mass production. With improved mobility and a more advanced version of the 122mm main gun that gave it unequaled firepower, the IS-3 was the first modern tank of the Cold War era. Its price is, unfortunately, equally impressive.

The IS family continued evolving throughout the Cold War until being absorbed by the T family, to form the T-64 main battle tank. The last Russian IS-8/T-10 was decommissioned in 1993, and it was never exported.

In combat, the IS-3 can massacre all other tanks in one single, well-aimed shot, with the exception of other super-heavy classed tanks (in which case it will take approximately 2 to 3 shots). Aircraft can destroy it, but it will take multiple fighter bombers and an absence of anti-air defense to do so.

In late 1944 the design of the IS-2 was upgraded to the IS-3. This tank had improved armor layout, and a hemispherical cast turret, which became the hallmark of post-war Soviet tanks. While this low, hemispherical turret may have improved protection, it also significantly diminished the working headroom, especially for the loader (Soviet tanks in general are characterized by uncomfortably small interior space compared to Western tanks).

The low turret also limited the maximum depression of the main gun, since the gun breech had little room inside the turret to pivot on its vertical axis. As a result, the IS-3 was less able to take advantage of hull-down positions than Western tanks. The IS-3's pointed prow earned it the nickname Shchuka (Pike) by its crews. It weighed slightly less and stood 30 cm lower than previous versions.

The IS-3 came too late to see action in World War II. Though some older sources claim that the tank saw action at the end of the war in Europe, there are no official reports to confirm this. The tank saw no action against the Germans, although one regiment may have been deployed against the Japanese in Manchuria. 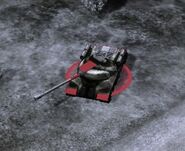