Digging out the Fox

Digging Out the Fox

From Bait To Prey...

After the Italian HQ is captured, Leslie approaches Lt. Col. Sheridan and Col. Campbell with documents that a German officer was trying to burn. Upon examination, Sheridan and Campbell realize that the orders for the entire offensive have been in German hands from the beginning. Campbell begins to suspect something is happening in the shadows...

Beginning the mission, you start out with a Combat Command consisting of:

Your initial goal is to take out what appears to be an exposed German HQ at Sidi Bou Zid. You are also advised by Colonel Campbell to locate the enemy AT guns by utilizing the Spy Ruse. Although it is merely a Bonus Objective, it would be highly advised to do so. Doing so will allow you to view the AT guns' range, allowing your tanks to safely maneuver outside their range to take out a unit of two tanks that could threaten your infantry advance on the AT guns.

Once you take out the nearby guns and protecting infantry, the enemy will react by sending a small force of infantry and a Panzer IV and Panzer III. Pull back your infantry and let your tanks - along with AT guns if you wish - deal with them. Keep in mind that advancing too close to the British Area of Operations (AO) will result in engaging scripted enemy units that have a VERY high resistance; it will take several shots from your AT guns to destroy a Panzer III.

Once the area in front of the spawn is cleared, move in to take care of the enemy armor base. You will learn that the armor base along with several other bases such as infantry and artillery can produce units. Take it out as soon as you can. It will continually produce Panzer IVs until it is destroyed. Move your light tanks to the left entrance of the city to cover the attack, but do not place them TOO far. The enemy AT gun in front of the next city can easily take them out. Once your light tanks are in place, move your medium tanks in to destroy the armor base, your AT guns behind them as support, and your infantry in the middle inside the city.

Once the armor base is destroyed, the enemy will counterattack with three tanks from the British AO. These can be easily taken out by your AT guns conveniently placed as support as they are not scripted enemies. Once that is done, use the Spy Ruse to identify the enemy units in front of the next city - a Panzer IV and an AT gun. Keep your armor back and use your AT guns to knock out the Panzer. Then move your infantry in to take out the gun, although beware: the gun will most likely retreat towards Wetherby's AO, where the enemies are also scripted.

Once all the enemies directly in front of the lake are neutralized, you have a great, albeit discreetly placed, opportunity to practice managing two fronts at the same time. There are enemies located on both sides of the lake. Although it would be easier to simply rush all your forces down the quickest path, the enemies left alive WILL move in to attack you later on in the mission. Split up your forces equally and move them up both sides of the lake, switching between each force after an order is given. BEWARE: The Pak 40 will be encountered for the first time near the German HQ. This is a deadly advanced AT gun that could easily kill your Stuarts in 1-2 shots. Use your RUSEs wisely.

Upon reaching the enemy HQ and wiping out all local enemy forces, you have two choices (non-objective) - either continue on with the main objective or assist your Allies in their fight. If the latter choice is made, it is advised to attack the enemy forces engaging your British allies. Use your AT guns to push back the enemy Marder tank destroyers and StuG assault guns. Remember that they are scripted enemies, so it will be difficult to kill them. However now that the enemy armor is pushed back towards the British and away from your forces, move your tanks and infantry to engage the enemy infantry. Once they are taken care of, move your infantry and armor to the U.S. AO while your AT guns take out the rest of the enemy armor. Do not worry about the enemy Morser artillery - they too are scripted and will only fire on a forest.

Once your British allies are saved, regroup your AT guns and other forces and begin to engage the enemies attacking your U.S. allies. Follow the same strategy as above - use your AT guns to push the enemy armor away, move your infantry in to take out the enemy AT guns (if any), and use your tanks to take out the infantry. Although this choice is time-consuming, it means that you will get extra points and a quicker arrival time for your Allies when the next objective is given. Once this is all done, move your forces and destroy the enemy HQ.

Upon destroying the HQ, it is discovered that it is a decoy! Even worse, von Richter has used Radio Silence on his forces - now you cannot detect direct movement of enemy forces against yours. You now must quickly do the following:

After four (4) minutes, you will have successfully completed the objective. Now you have been given orders to destroy as much of the enemy as you can - specifically 1000 points worth. Now that your British and U.S. allies have arrived, it will be much easier as their kills will contribute to the the objective. The best way to quickly achieve this objective is to rush all of your forces north to the real enemy HQ while leaving a few AT guns to cover your rear. If your forces manage to reach the HQ relatively intact, their line of sight will reveal a new Secondary Objective: Take out the Tiger tank. If you know anything at all about World War Two, then you know that the Tiger is an EXTREMELY dangerous machine. Marshal all of your forces together and focus their fire on the Tiger. Destroying it will earn you extra points to both your score and the objective.

Once you have achieved the final objective, the mission will end. However, close to the entirety of the Afrika Corps has escaped, even the rear guard. 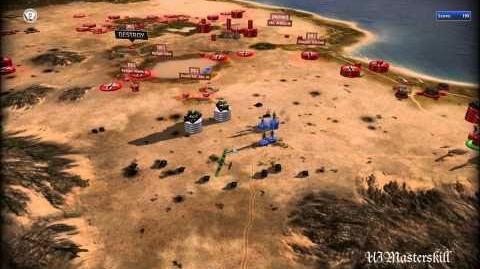 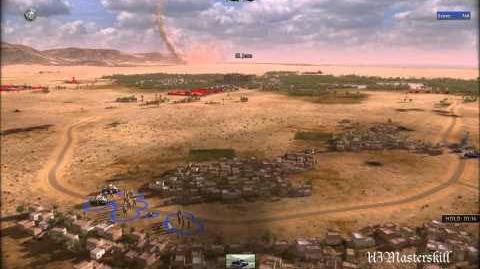