Blood'n Guts is the 18th mission of the R.U.S.E. campaign.

After Sheridan and his 8th Corps hold back Von Richter's brutal assault, help arrives and the Germans fall back. Now Sheridan teamed up with the great British General Monty and the famed Patton to defeat the German's last offensive of the war. When Sheridan realizes Von Richter is about to retreat, he assumes overall control of the operation and encircles the German HQ before sending Airborne troops to capture Von Richter.

Story wise, your ground forces are tired out, which leaves you without tanks at the beginning. But you still have two airstrips and some planes, including a brand new P-51 Mustang! First you'll want to deploy a supply line to the nearest depot, and construct a AA base. Patton's tanks need help first. Send a recon plane and you'll find not the entire German force retreated. Build more fighter bombers and deploy the ones you already have. The Pak 40s take priority, and the AI tanks will automatically fire on the infantry. If you have a spare fighter bomber, try and take out the Puma, as it will cause problems later usually. Once the cavalry take out the German forces, they will advance over the bridge. You should deploy two AA trucks to the bridge behind them, this will be important later, they may also take out a German ME262 jet fighter circling the area. A scripted building truck will build you a free airport, assuming and remaining infantry or the Puma doesn't destroy it.

You need to deploy Bofors in the woods near your base, as German Blitz bombers will attack your depots. This is a bonus objective to take them all out. You should keep building fighter bombers when you have the funds, though remember to keep at least four fighters around. The British force will advance on the other side of the map against German Jagdpanther. Send fighter bombers and destroy ALL (very, very important) units. An 88 is amongst them, so you may lose a plane. Once the British break through, they will gather over the bridge. Like Patton, you need to send two AA trucks over there, and fast! Two automatic building trucks will follow the British and establish for you a free airport and secondary HQ, assuming German planes don't intercept them.

After this, you'll get another distress call from the tanks. You do not immediately have to respond, as they will never lose. Just keep your AA trucks close, and turn your attention back to your base. You should spend some time building more planes, as they will become drastically important in the next few minutes. If you are low on supplies, your new secondary HQ is next to a supply depot and there is a liberated one near Pattons forces. In necessary, build another airport. You should have 4 or 6 bombers, 6 fighters, 2 scout planes, and as many fighter bombers as possible. At some point, AI controlled Priest artillery will arrive. This is also a bonus objective. They will be subject to German ground and air attack, so use fighters overhead and use a spy ruse to mark the tanks for the P-47s. If they survive, you will take control. If General Patton's tanks haven't already done it, clean up the remaining German forces. You will learn Von Richter plans to retreat. Sheridan will now take control of the British forces and Patton's tanks to catch him.

Situation report: On the left side, you have your airport, and several British Regulars supported by Archer tank destroyers. On the right flank you have Patton's tanks. Keep your AA close, or German Stukas will completely wipe out your new forces. On the German side, there are still a fearsome force. On the left, there is a anti-tank base, and several guns, not to mention a airport. In the center, the HQ (your capture target) is surrounded by a bunker and several production bases. On the right, you have a airport and a AA base, surrounded by more 88's. Another airport is near the back, and the Germans still have many dive bombers.

You need to multi-task here. The AA base on the far right in a serious threat, as the Germans will produce dozens of artillery pieces is unchecked. Use a Spy ruse to reveal the 88s and send fighter bombers to destroy them (you may lose a few aircraft). Move your tanks and AA up to take our the airport and then move up and destroy the AA base. Your right flank is now secure. It is important to take note that three German prototype AA tanks are around, which can hamper your efforts. One is on the left by the AT base, another is directly next to the HQ, and the last in next to a bunker that closes the path to the HQ from the right flank. Reveal these with spy ruses and send fighter bombers in a rush again them. Now it is time to use your bombers to their full extent. Send fighters to keep the Stukas busy while you send the bombers to destroy the last two airports and the AT base. Your left flank is now secure. You now can focus your efforts on the HQ. Use dive bombers to destroy nearby forces, and send bombers to destroy the two bunkers. With the furthest bunker destroyed, you can move your tanks close the the HQ to secure it. Keep using bombers to destroy production buildings. Send a spy plane so the dive bombers always have a target. At this point, you can either send to British infantry to capture the HQ from the left flank, or you can deploy Airborne. If executed correctly, you will finish with at least 4 minutes to spare. 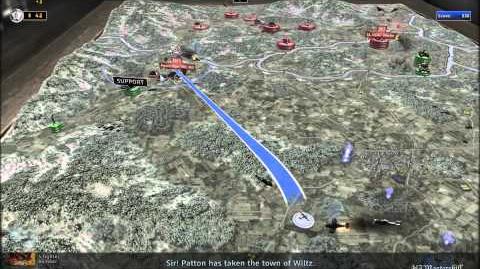 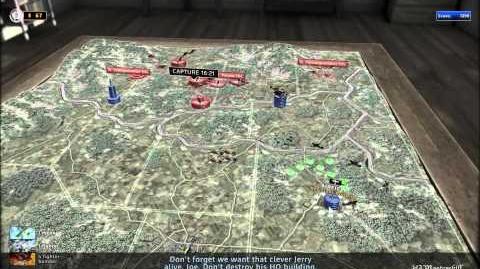