Escort 15 Matilda heavy tanks across the bridge to get to Arnherm
A Bridge Too Far is the 15th mission in the R.U.S.E. singleplayer campaign and the last mission in the Holland section. In this mission, Sheridan's 101st and 82nd Airborne Divisions must help the tanks of the Irish Guards to pierce through the last bridge near Nijmegen to get to Arnhem.

Operation Market Garden is regarded by Sheridan as a disaster because of the losses they are taking. The 82nd Airborne on Nijmegen was saved by Sheridan's 101st Airborne. The Red Devils regiment on Arnhem is holding out on its own, but needs support, so the tanks of the Irish Guards plan to help them by punching through to Arnhem. But when they got there, the regiment was completely annihilated and the last bridge is still under control of the Germans. This regards the operation a strategic failure.

Now we are at Grave, Holland. As you might know, the operation we are doing now is completely a disaster, because if you guess who is doing the defense job, you might know. Yes, we are facing Von Richter. And now we have to deal with it because the lack of intel.

First thing, the 82nd Airborne is running low on ammo and might not survive for long. That gives you your first objective. Rescue the 82nd. You only have 1-2 minutes so do it fast! Train 4 Vickers tank or train a few Regulars (note: you are still controlling units of the UK, with the exception of the paratroopers) and rush them to the outskirts of Nijmegen. After you relieve the 82nd, you will assume command of them.

Now the briefing. The Red Devils Regiment on Arnhem is holding out against the German reinforcements. You have 2 Airborne Divisions and a corps to help you out. The Irish Guards have an armor base producing Matilda tanks. FYI, Matilda tanks are a British heavy tank, but lacks the firepower of one, therefore making it a weak armor. The colonel said that if you help all tanks to punch through, he will pay for all off your drinks in the war. Nice. Now lets get going.

You will notice you have and airfield directly. put up a recon airplane and use it to scout the area ahead. Then directly research the Typhoon. Typhoons are the de facto masters of tank killing aircraft. They are armed with 8 127mm rockets so powerful that it can kill a level 5 armor with 2 planes only. They are also decent fighters with 4 20mm guns on their wings, and can hold on their own, but preferably with support, as it would be a waste of $40 if you lost one against another fighter.. Once you research them train 4 of them, and make sure you secure the depots near Nijmegen.

Make sure you keep them flying above Nijmegen for as long as needed to kill off any armor threatening the Matildas. There is an objective that said to keep all 15 tanks alive. That is hard, however, if you keep those planes up there, you'll be fine. Don't worry if you fail, it's just a secondary objective. Now, there is a catch, German bombers are trying to bomb you to kingdom come, but you are granted the Bofors 40mm AA gun. They are trained out of the AA base. train 3-4 of them and put them in the forest where there is a British Bofors. Once that is done, your Typhoons can take care of the Me 109's guarding the bombers.

Now there is a side objective again. A base in the Northwest are making Pak 40's to destroy the Matilda heavy tanks, and we are asked to capture it. So train 6 Airborne and drop them at the forest near the base, and make sure you kill off those bunkers too. By now you should have an airbase full with Typhoons. Just make sure they are kept there until they have to reload.

In the end when you have 15 tanks pushed through, the Red devils are killed off by the German armor and the last bridge are held by them, and Operation Market Garden is a failure.

Start out in much the same way, a single recon plane and research typhoons, to linkup however, simply build on the two supply depots, once you link up, spread your airborne out to the two towns leading into the top of Nijmegan. The Northwest base will start producing AT guns to ambush the tanks across the river, drop two or three squads into the forest just across the river to stop them.

Build two typhoons, the German attack will not begin in force yet, the West flank will either go through the town or just around the forest, allowing for quick infantry ambushes, keep a few vickers tanks around to destroy stray infantry. The East flank will send artillery through the other town along with bombers and tanks that will go straight for the road in between the town and the forest. Use bofors in forest to target bombers together with typhoons.

When you see an opening between attacks, use the typhoons to destroy the machine gun bunkers and tiger tanks in the Northwest base, land paratroopers in both the base to capture it, as well as in the forests across and on your side of the river as this will prevent a future Fallschirmjäger drop.

Continue producing typhoons as well as dropping airborne whenever you see gaps, make good use of blitz to speed up the process, and help the slow tanks along their way. Also, when the time comes to revert frequencies , it is much better to use radio silence instead as it prevents all targetting barring line of sight. 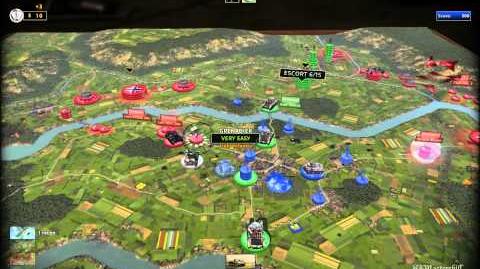